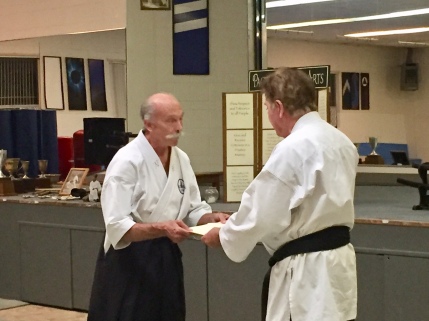 At a recent special black belt class at Old Town two students were given the special title of Sensei. In the PMA this is a title one can earn after fifteen years experience, sandan ranking, and dedicated teaching. Only ten titles of Sensei have been awarded in nearly forty years of PMA history.

Many dojos use the word sensei to indicate ‘teacher; and often let many students use the term in the very informal manner such as Sensei Joe. This relegates the meaning of the term to something lesser. We use the word Sensei after the person’s surname. Hence Adams Sensei and Vaughn Sensei. Although acceptable, we do not use the title by itself, the name is used with it.The Sensei of course never uses the title in referring to himself, it would be consider not humble. So Adams Sensei might tell you he is Mr. Adams but would never say or introduce himself as Adams Sensei. It is up the other students to know just who holds the title and be respectful enough to use it.

Past Sensei awards have gone to Mr. Eros, Ms. Shishido, Mr. Brickman, Mr. Rosado, Mr. Brown, Ms. Black, Mr. Conway and Mr. Granja. The title is not one of athletic achievement and in the PMA is a consider a title more of reverence for longevity, loyalty, and carrying on the school principle of ‘Ho On I Do’ which means it is the obligation of the student to carry on the teaching and knowledge of the teachers.

In the photos are in order Marc Adams Sensei, and Andrew Vaughn Sensei. In the other photo Mr. Peter Grootenhuis is seen receiving his third degree or sandan rank as a black belt. This now helps put him directly on the path to being a sensei. He teaches both the noon time class at Del Mar, the Wednesday class there, and assists directly at the weapons class on Saturdays at Old Town. He has specialized in wheel chair techniques, has now complete the Kobudo of the PMA book, a 120 page manual of classic weapons and history of the PMA. ( In the photos Master Devine is making the presentations at the Old Town dojo on October 16, 2017.)