On July 11th Jeffrey Platt was presented with his new black belt, the culmination of 10 years dedicated training in the PMA. Mr. Platt has been a driving force both in class and at the schools outside events such as camps and tournaments.He has worked his way through  athletic injuries and more and always find the time to commit to regular training. Behind the scenes he is a great organizer in setting up work details at the many camps ranging from cooking, set up, clean up and transportation. He is a regular attendee at the Sunday informal workouts in the parks. Mr. Platt first was introduced to martial arts in LA where as a child he started in judo some fifty years ago. He likes the art of breaking and excels when given the chance to compete.  He is the 91st PMA black belt promotion in the PMA history. In the photo we see part of an outstanding karate demonstration at his ceremony before about fifty guests who were intrigued by the power performances, as Colin Metcalf takes down Seth Brown. Excellent food and beverages followed the event. 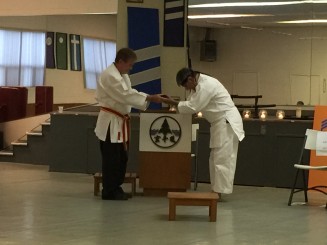