The last promotion for black belt in kobudo or weapons was made in 2007 at the PMA. On January 9th six new black belt awards were made. Earning a degree in weapons is usually done by a small minority of the black belts. It takes specialized training and mastery in three or more weapons areas such as the bo, the bokken, hanbo, sword, and more. This moment is a great historic accomplishment and indicates the depth and dedication of students to study long years to reach a new goal.

Current active dan holders are Michael Brown Sensei (4th dan), Eric Rosado Sensei (2nd dan) and Becky Black Sensei (2nd) dan and recently awarded, and of course head instructor Master Devine. The new first dan holders are Peggy Teng, Marc Adams, Yuri Gorokhov, Andrew Vaughn, Peter Grootenhuis and Seth Brown. The study of weapons in the PMA is quite distinct and although in the general classes we do teach the short stick hanbo and long staff bo, generally separate classes are held for the other weapons. At the current time students must hold a black belt in open hand karate in order to advance to black belt in weapons study. Everyone on the list has at least thirteen years in karate studies. Seth Brown is the youngest at seventeen years to earn this rank in weapons. 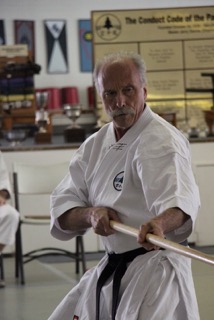 The ceremony to give out the awards was held at Island Palms Resort on Shelter Island Sunday January 17th. Each candidate picked a special friend or family members to award the certificate in conjunction with Master Devine. This award concept is to let the friends and families know we appreciate their large supportive role in the progress of the students.

The ceremony featured a short dedication of karate to the new awardees by some junior members that included Sarah Brown, Ian deGrood, Ethan and Brandon Diep, Isaiah Brown, and Emma Rose Denton. The Polynesian buffet was outstanding.